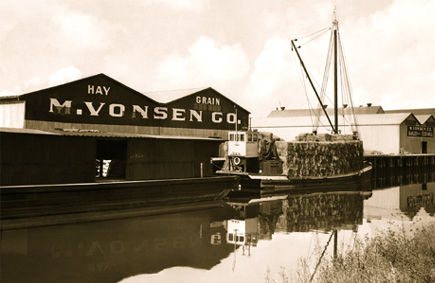 For over a hundred years there has been warehouses and a feed store on or near the Petaluma River. It all started in the early 1900′s, when a man by the name of Magnus Vonsen, filled the warehouses that were located on 1st Street next to the Petaluma River full of grain for Petaluma’s agricultural community. It was a time when over a dozen feed mills would spring up around Petaluma and the town was known as the “Egg Basket of the World.”

In 1956, Heimi Ash became a financier and silent partner in Vonsen Feed & Milling Company. By 1959 he held the controlling interest in the feed company and was soon joined by his son-in-law Paul A. Lewis. With his knowledge of the dairy and farm industry, along with his mechanical know-how Lewis was a welcome addition to the family business, and his involvement helped facilitate the building of a new mill and the expansion of the retail. 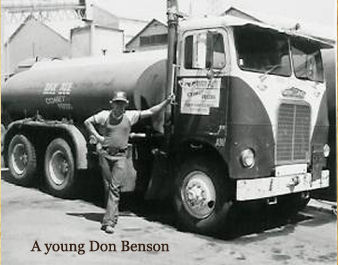 In 1979, Lewis’s son-in-law, Donald Benson, joined the family team at Bar Ale Inc., and Lewis’s own son, Tracy Lewis, would soon follow. With the addition of this third generation came a new energy and vision for the family corporation. Benson’s versatile talents lead to the expansion of the Petaluma retail store, which soon expanded into the companion pet market. This new concept for the retail store included an innovative avian and exotic bird section, which was facilitated by Tamara Lewis-Benson. 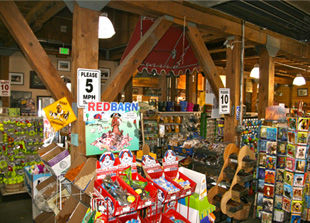 By 1992 management and ownership of Bar Ale Inc. included Paul A. Lewis as President, Tracy Lewis as Vice President, Donald E. Benson as Chief Financial Officer, Marlene Ash Lewis as Secretary, and Tamara Lewis-Benson as a board member. By 1997, the Bar Ale feed mill would move its operations to a “state of the art” feed mill in Williams, California. The retail store remained behind on the D Street bridge on 1st Street.

On October 29, 2000, a tragic fire destroyed the Bar Ale Feed & Grain retail store. More than four dozen birds and small animals lost their lives in the fire. With the help and support of the Bar Ale retail staff a temporary store was set up in the old, Bar Ale mill site, which was located directly across from the original retail store. On January 1st, 2001 Donald and Tamara Benson took over the management and ownership of the retail business, and renamed it RiverTown Feed & Pet Country Store. On October 13th, 2001, nearly one year after the fire, Rivertown celebrated its Grand Opening with an event that included more than a thousand people from their community.

In the past decade Rivertown Feed & Pet Country Store has been dedicated to bringing their community the best in service and products. And while the store continues to establish new ground in the pet industry it is also proud to be a part of Petaluma’s agricultural past, present and future. Owner Don Benson looks forward to continuing the one hundred year old legacy of a family owned feed store by the river in the town of Petaluma, California.

Come on Down to Rivertown!

WHAT Petaluma CUSTOMERS ARE SAYING

We love all our customers from Petaluma areas around Petaluma, Novato, Sonoma, Napa, Santa Rosa, Bodega Bay, and more!

Friendly and well stocked. It's like walking back into another century.

They have all the essentials for our chickens and a variety of offerings to choose from. Also a great selection of dog food. Friendly and helpful staff as well.

At least once a month I go into Rivertown for some dog food everytime I go in the staff are willing to help me out if they don't have something in stock. They will. Special order it for me. they know what customer service is.

View All Reviews Write A Review
Come visit our pet supply store in Petaluma, CA specializing in quality food, treats, and supplies for for your pets..